COLUMBUS, Ohio — Ohio voters will decide next week whether to legalize recreational and medical marijuana. But they won’t be able to change the laws that keep it a federally illegal substance and make the marijuana industry costly, burdensome, and risky.

Each of these states has created a legal industry a little bit differently, and Ohio’s plan would be unique in that it limits commercial growing to only 10 sites belonging to investor groups bankrolling the ballot measure.

But those 10 investor groups, as well as the thousands of people Issue 3 backers expect to join the industry, will face many of the same challenges as their counterparts in other states.

Mobile readers: We’ve broken this story into several pieces so you can jump directly to any section that interests you. You can hit “back” to return to this list.

The federal Controlled Substances Act classifies cannabis as a Schedule I substance alongside heroin and ecstasy — drugs with “no currently accepted medical use and a high potential for abuse.”

But the federal Drug Enforcement Administration has largely left legal marijuana states alone. In 2009, the U.S. Department of Justice under President Obama said it would not focus federal resources on prosecuting marijuana crimes that are legal in medical marijuana states. The DOJ made a similar announcement in 2013 regarding states that have legalized recreational marijuana.

It’s possible that a future president could change course and choose to enforce those laws in legal states. But Alex Kreit, a law professor and director of the Center for Law and Social Justice at the Thomas Jefferson School of Law in San Diego, doesn’t think that will happen.

By 2017, Kreit said, several more states will have legalized marijuana, and the legal market in Colorado and Washington will have been established for several years.

The feds agreed to let states enforce their own laws as long as a strong and effective regulatory system is in place. But the Drug Enforcement Administration still busts marijuana cartels, trafficking marijuana across state lines, and distributing it to minors, among other offenses.

Under Issue 3, much of the regulation for Ohio’s industry would be established by a new seven-member Marijuana Control Commission appointed by the governor. Issue 3 includes specific deadlines for the commission to establish regulatory policies.

Andy Joseph, an Ohio businessman in the cannabis industry, said the commission likely won’t be able to meet those deadlines with policy that meets the Justice Department’s guidelines.

Joseph, whose company, Apeks Supercritical, sells cannabis extraction systems across the country, said some parts of Issue 3 could put Ohio out of favor with the feds. For example, he said, ResponsibleOhio, the committee backing Issue 3, added last-minute concessions to win votes — regulations for homegrow operations and allowing “artisanal” growers to use investors’ land.

“That goes 100 percent against the idea of small grows that can be easily regulated and managed,” Joseph said.

ResponsibleOhio spokeswoman Faith Oltman said the proposed constitutional amendment was drafted to specifically comply with the federal guidelines and it will be up to the commission to adopt regulations consistent with those guidelines.

“There is nothing that the amendment could possibly do that would be in conflict with the [guidelines], since it passes on all the power to comply with them to the commission,” Oltman said in an email.

“To the extent those businesses are forced to pay a 70 percent tax rate, it makes it very difficult to compete with and undermine the black market,” Riffle said.

Kreit said businesses have to hire lawyers to help them comply with federal and state law, compounding costs that get passed on to the consumer.

“Basic economic theory tells us if you end prohibition, the cost of the item should fall, but this is one thing that keeps marijuana prices higher than they should be and in some cases higher than the black market,” Kreit said. 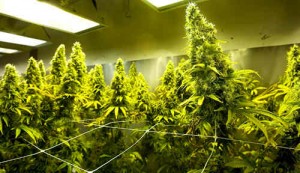 The Patriot Act and Bank Secrecy Act have made banks the front line defense against money laundering for illegal and terrorist activity. Because marijuana is illegal federally, banks and credit unions have long believed they could be prosecuted for money laundering and have refused to serve marijuana businesses.

That has left most businesses holding bags of cash — literally.

Without bank accounts, marijuana businesses must find ways to secure large amounts of cash on a daily basis. In addition to storing money on site in vaults or safes, many businesses hire armored car services to ferry cash to more secure locations. Rent and utility payments, paychecks, and taxes are all paid in cash.

Banks that do want to serve marijuana businesses were advised in 2014 to take several steps to minimize risk, including filing suspicious activity reports with the Financial Crimes Enforcement Network of the treasury department.

Paula Givens, who advises cannabis businesses about financial services, said the guidance didn’t prod banks to open their doors to the industry.

“The truth of the guidance is that it essentially says if you do all these things and you do them perfectly, we might not prosecute you,” Givens said.

Legislation has been introduced to open the banking industry to legal marijuana businesses, but Riffle doesn’t expect it to pass before 2017.

The federal prohibition on marijuana has chilled research on the effectiveness of medical marijuana.

A review of marijuana research published in June in the Journal of the American Medical Association found evidence that cannabis can treat chronic pain and muscle stiffness, but not much else. But researchers said there’s not enough high-quality research being conducted, a result of the federal prohibition that makes it more difficult to study the drug’s possible medical benefits.

The National Institute of Drug Abuse approves studies, which use federally funded marijuana grown at the University of Mississippi, and the agency has been reluctant to green light research that might show a positive benefit of ingesting marijuana.

Kari Franson, an associate professor of clinical pharmacy at the University of Colorado, said the federal hurdles initially discouraged the state’s universities from studying marijuana even after recreational use was legalized there in 2012.

Franson said unlike the food and beverage industry which helps pay for product research, university researchers can’t fund their cannabis studies with donations from the marijuana industry. Colorado lawmakers appropriated $9 million in state funds for patient research this year.

Physicians, even those in states where marijuana is legal, can’t prescribe the drug because of federal law. But courts decided years ago that a doctor’s recommendation falls within physicians’ First Amendment right to freedom of speech. So doctors are allowed to recommend that patients use marijuana.

Issue 3 would require those with “debilitating medical conditions” including cancer, post-traumatic stress disorder and seizure disorders to receive a medical marijuana “certification” from their current physician.

In Colorado, which legalized medical marijuana in 2001, Franson said it has taken time for physicians to educate themselves about cannabis, in part because of the federal stigma. But Franson said things have improved, and medical professional associations and societies there have advocated for more education.

“Clinicians are asking the right questions, but they’re not trying to prescribe it,” Franson said. “They’re not completely staying away from it and condemning patients who use it.”